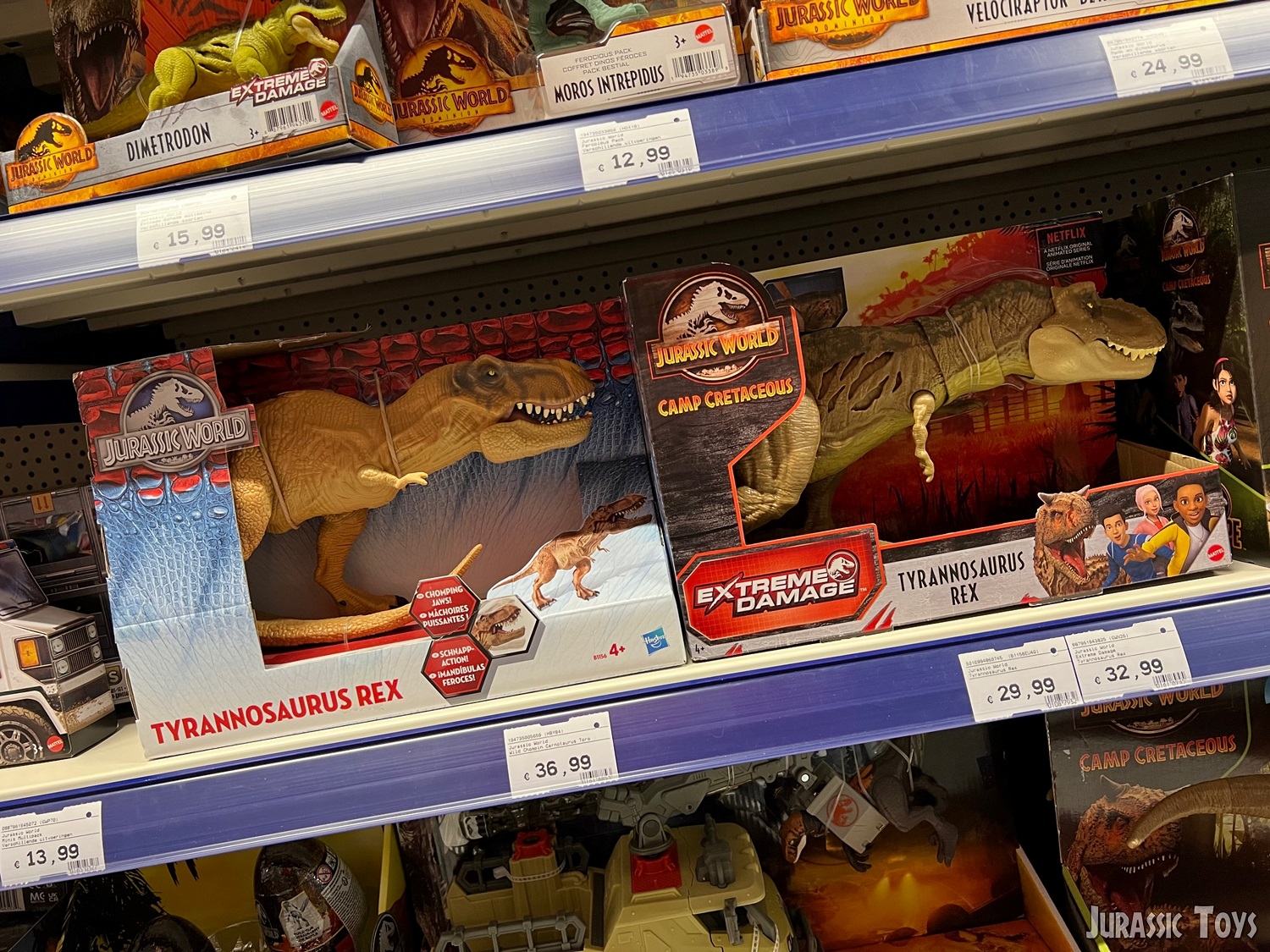 Last month I went for a Jurassic World Dominion toy hunt recently at a nearby toy shop. While they didn’t have that much toys from Mattel’s new toy line, I did manage to find something quite particular.

Hidden behind the Jurassic World Camp Cretaceous Extreme Damage T-Rex, there was a toy figure that will make many Jurassic fans shudder by just the looks at it.

Hasbro has been releasing the Jurassic toys since 1993, starting with the original Jurassic Park film through their Kenner branch which they took over in 1991. The Kenner line is still being praised today for its quality and scale size between the human figures and the dinosaurs. They continued this in their The Lost World line as well. But in 2001, something changed. Hasbro had dropped their Kenner branding and started releasing toys under its own name, including the Jurassic brand. They not only dropped the Kenner brand, they also completely reimagined the new Jurassic Park III toy line, breaking with the “in-scale” tradition between dinosaurs and human figures. The design of the dinosaurs was also less inspired by the film’s designs. Many see this as the start of Hasbro’s licensing demise.

In 2015 Hasbro once again partnered with Universal Pictures to release the main toy line of Colin Trevorrow’s Jurassic World. Jurassic fans had high hopes that Hasbro learned from it’s mistakes from the past. However when the first images of the new dinosaurs started to hit online, the reality settled in. Many realized that most – if not all – of these toys were going to be worse than the Jurassic Park III toy line. This was immediately confirmed when the toys hit the toy shelves. Hasbro seemed to make the one mistake after the other. Every dinosaur figure had screw holes on one side. The dinosaur designs could not have been further from their movie counterparts. Many dinosaurs broke after a couple of uses and the lack of human action figures was a huge missed opportunity. Instead, badly painted generic military figures were included in some of the combined play sets. There was even one set that came with a cardboard (!) figure.

One of the worst designs coming out of this toy line is the Chomping Jaws T-Rex. Nothing seems right with this design: an out of proportion body shape, weird off-color paint scheme, creepy eyes and an overbite. So as you can imagine, I was totally startled when I found this T-Rex between Mattel’s Jurassic World toys. Hidden behind one of Mattel’s best T-Rex designs was this strange thing lurking, waiting for an unaware grandparents to buy this for their grandchild.

It’s no surprise that Hasbro still has a huge stock of these dinosaurs. They probably expected an immediate success, which could have been given the box office results of the 2015 film, but their poor choices with the design and quality of the toys, left many behind on the toy shelves.

When it was announced in 2016 that Mattel won the new licensing deal over Hasbro, you could hear champagne corks popping all around the world, just like John Hammond did in Grant’s trailer. Mattel has been delivering hit after hit, not shying away from fan service and coming up with new dinosaurs year after year since 2018.

What are your thoughts about Hasbro’s demise? Leave message below!