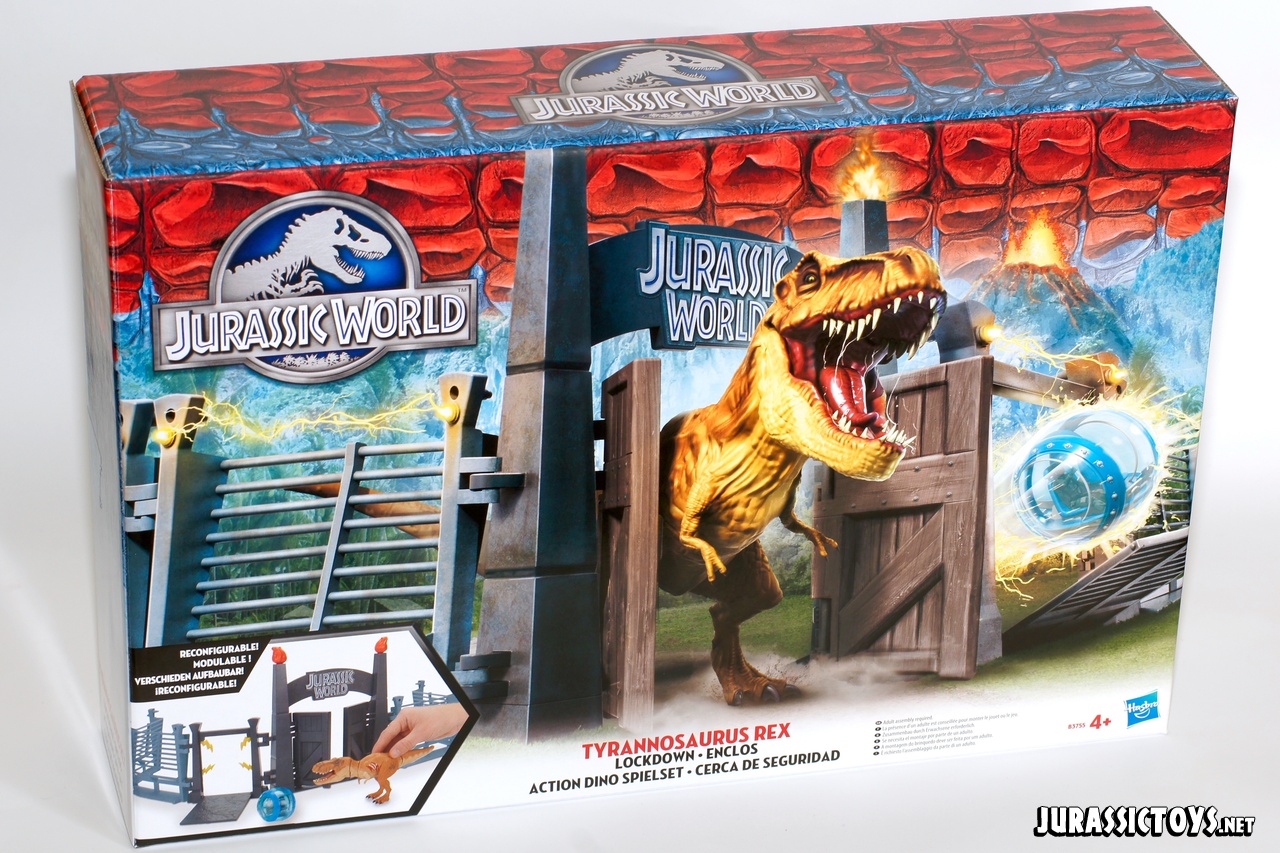 Although the Jurassic World set looks similar, it was produced from a whole new mould.

The outerbox features really great and exciting artwork, reminiscing the hay-days of Kenner packaging. There’s a slight difference between the USA and European box, the latter is way more sturdier compared to the flimsy USA version.

The set comes with the Jurassic World gate (which looks more like the original Jurassic Park gate and not the JW gate we saw in the movie), 4 electronic fences (again, very similar but smaller than the ones that came with the Command Compound), a net launcher, a gyrosphere  and some sort of an escape door. Everything is cramped in the inner box. It looks messy, but it’s handy to put everything back and store it away safely.

The gate comes in separate pieces but can be detached afterwards. Again, the design is very similar to the Command Compound gate, yet there are a few differences. The flames for instance are much bigger and rounded and the doors are not held together by a “Dino-Damage” plank.

The gyrosphere door feels the most sturdy compared to the other stuff. When it’s pushed open, 4 cartoony lighting bolts appear in each corner.

The net launcher is very basic and looks a bit like the net launcher from the Command Compound set, but without its legs. The net looks really weird and feels kinda sticky.

The Tyrannosaurus Rex figure is identical to the “Bashers and Biters” T-Rex that was released a while ago. That means that all other Bashers and Biters will feel way out of the scale within the enclosure.

The gyrosphere is probably the worst in the set. It’s smaller than the ones that came with the “dinosaur vs.” line and doesn’t even include an actual figure. Instead a printed cardboard of a figure is inside this gyrosphere.

Overal this is not a really great set, Hasbro could have done a much better job. This set could have been somewhat inspired by the movie by calling it the T-Rex Kingdom or something like that but following the movie’s storyline is clearly not what Hasbro had in mind when they were producing these toys.

The T-Rex Lockdown set is kinda cute, but that’s about it.